We celebrated the 4th of July in rather note-worthy ways yesterday.  First, Judah decided to celebrate his Independence by learning to crawl.  And so he crawled right on over to the bowl of dog food.  It’s like a baby-right-of-passage to eat dog food, isnt’ it?

Second, the Hero Hubs FOUND US A HOME!  I repeat: WE HAVE A HOME!  Backstory: yesterday morning I was feeling a little…um….unsettled about being unsettled.  I spent some time praying (hiding in the bathroom, of course) and told God that I think I’m nearing the end of my endurance factor regarding house-hunting.  I also told Him that I think I’d like to try living in something a little smaller.  Like I shared in a previous post, being on the road has piqued my interest in smaller, simpler living.  I even went a little overboard by watching the documentary Tiny: A Story About Living Small, got all euphoric, and then told Micah I want to live in a mobile, 800 sq foot shed/house like those people in the documentary.  Particularly one that looked like this.

He quickly brought me back to Earth.

So an hour after my Heavenly Request, Micah calls to tell me he was put in touch with a family planning to put their house on the rental market.  Within a few hours, we found ourselves the proud tenants of a beautiful, smaller-than-we’re-used-to home.  I really look forward to this experiment and sharing what I learn/love/hate/observe about living in a well-lived-in house.  Ok, I’m done with hyphens and backslashes now.

We rounded out the 4th of July like millions of other Americans: fireworks.  We walked half a mile to a beautiful lake, where I promptly organized a family photo.  And then the night promptly went south.  Apparently, I organized my family photo on top of a red ant hill.  Nay, a red ant mountain.  Awesome. 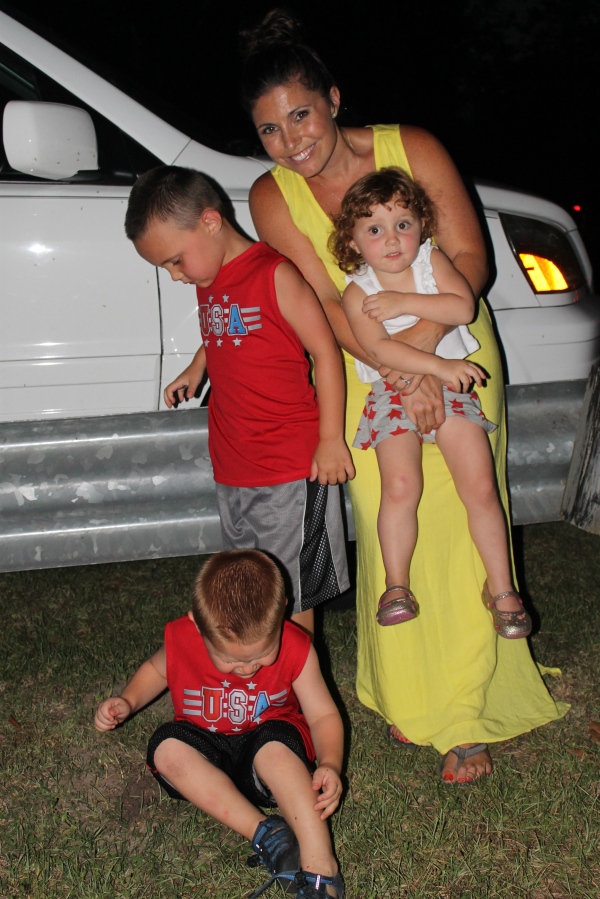 Though you can’t see them in this picture, they were there and they won.  After quite a bit of screaming, tears, and frantic undressing (thank God I somehow remained calm enough to NOT rip my dress off) we recovered enough to sit down for the show.  Or perhaps it was the after-show to Kirkpatricks vs Fire Ants?

*I was told later that dipping the kids in the lake would’ve been ideal, except for the alligator factor.  Are you kidding me?!?!

So as I sat with two little boys wearing nothing but their boxers and dried tears and sweat, I answered questions like “Why did God make Fire Ants” and “Why am I naked” and “Do we have fire ants in Philadelphia.”  To which I answered “I’m not sure He did”, “Better you than me”, and “No, just city rats and crime.”

Thanks to all our strong relatives who carried our naked children home, provided medicine and hugs and a true Southern experience.