Two years ago I was walking through the front door of my Philadelphia home, my 2-day old son in my arms.  We had just brought him home from the hospital.  I sat on the couch with my 4 other children, all grinning and giggling and admiring this precious little boy.  My fourth son. 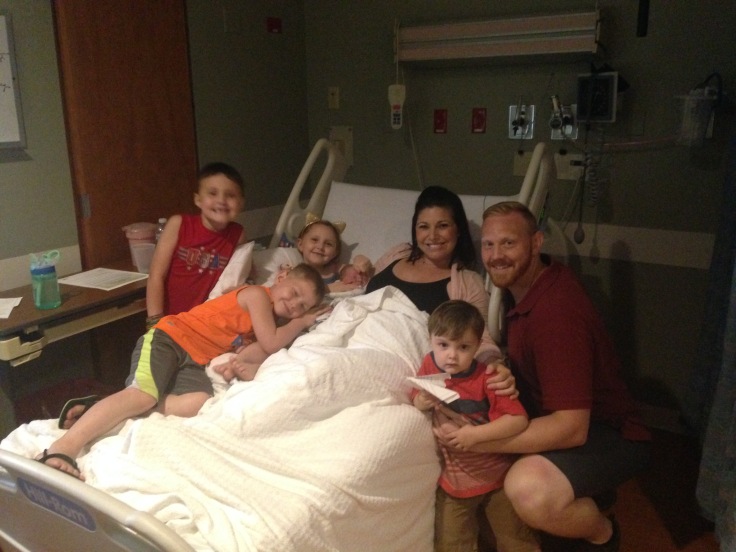 The phone rang but I didn’t notice.  Micah took it.  He came back and I remember he looked solemn. We played a little longer before he put the children to bed.  Micah had tears in his eyes as he gently put his hand on my shoulder and said, “why don’t you kiss your children goodnight.”  That struck me as unusually sentimental.  But after all, we had just had a baby! After kisses and hugs and several pleas for the baby to sleep in their room, I closed their bedroom door and tiptoed back downstairs, alone with my thoughts and my newborn.  I remember cutting up an apple and spooning out a tablespoon of peanut butter.  All very calculated. Finally, my body can get back to normal.  My life can get back to normal.  It will all be measured and planned again.  Delivering this baby had been like being dragged to the finish line of a long, weary race I hadn’t signed up for, and now all I wanted to do was put my life back together as we began our next adventure.

And then Micah came down, sat directly in front of me, took my hands in his, looked into my eyes and said with such clarity and grief- Stephen is dead.  He was struck by lightening. Even as I write this I can feel my heart racing and my palms sweating.  I still can’t sit on that specific cushion of the couch; the memory is too strong yet.

That phone call Micah took had been from Kit, my dear friend and the mother of 6-year old Sam’s best friend, Stephen.  She was calling from their beach vacation,  her 3 daughters with her; her husband in an ambulance somewhere with her son. One bolt of lightening. And Micah had given me the gift of one hour of joy with my family, my newborn, my dream, before it turned into what felt like a nightmare.

I don’t have much memory of the next few weeks.  Just bits and pieces.  I remember not being able to understand how a 5-year old boy could be struck by lightening on the beach.  Like maybe it was some sick joke or that I was mishearing the story.  I remember a friend racing over to sit with us as we cried and prayed together and tried to make sense of this tragedy.  I remember Micah having to remind me- physically walk me through the motions- of nursing my newborn.  I felt disconnected from my body.

I remember pulling into my friend’s driveway like I had so many times before, except now I had a new son with me and she didn’t have her only son.  We ran to each other, falling to our knees in her driveway, in a grief beyond what could be expressed through groans and wails.  For the next few days we would sit on her couch and plan a funeral, discussing hymns to be sung and verses to be read, all while I nursed my baby and fought a vague sense of guilt.

With a week before Stephen’s funeral, I set to the task of writing an eulogy, all while packing our home to be moved to Georgia in 2 weeks and single-parenting as my husband left for the beginning of his MBA program in Atlanta and nursing a newborn every 2 hours and helping my older children grapple with their grief.  The day after Stephen had died, Micah had taken 6-year old Sam and 7-year old Silas for a walk in the woods, where to this day I don’t know exactly what he said.  But I know it was sacred.  And that my boys came back home more grown up. And that they still had lots of questions and I had no answers.

Until today, I’ve never revisited what I shared at Stephen’s funeral, words written in the middle of sleepless nights with a newborn in my arms and a candle lit on the night table.

Words on a piece of paper I now held with sweaty hands and with a baby strapped to my chest in his carrier as I looked out into a loving, grieving crowd of friends and family who loved Stephen.  With Kit’s permission, I’d like to share those words with you now.

The Little family first walked into our lives soon after we moved to Pennsylvania.  Or more like- waddled into our lives.  Kit and I were both very pregnant with our 4th children when we bumped into each other at a homeschool conference.  She had been a parent longer, a homeschooler longer, and had lived in this area longer than I, so I attached myself to her.  I had so many questions.  I desperately wanted a mentor.  What I didn’t know was that I would be gaining a dear friend.
So it was only a matter of time before our husbands and children became friends.  Stephen and my son Sam spent once a week together in a nursery setting.  And that eventually turned into occasional playdates.  Which turned into regular play dates.  Which turned into buddies.  Which turned into best friends.
The kind of boyhood friendship that contained glorious amounts of mischief and mud, fighting and laughing, and ridiculous amounts of snacks.  Stephen became such a regular presence in our family that even I would find myself missing him if we hadn’t seen him that week!  There was just something about him.  Those fiery eyes.  That raspy voice. That head of hair.
My home, and our hearts, are marked with beautiful memories of Stephen.  The way he’d proudly present a homemade gift to Sammy right as he walked through the door- the camouflage bandana with sparkly glitter paint was my personal favorite..and I suspect his sisters had a hand in it.
The way he and Sammy would march through the rose bushes and hydrangeas in our backyard-as tall as they were- slaying imaginary monsters for hours.  The songs they would compose on the keyboard and drums…there was one about taking over the world; classic.
The way Stephen would run and hide in our basement when Kit would come to pick him up.  His deep, raspy, unusually loud voice yelling “I’m NOT going”.  Man, he had a great angry voice.
The way they’d hug and yell “I Love you” after a play date so innocently, or compulsively give away a favorite toy to each other.
How many times did Kit and I sit at the kitchen table, or stand at the front door, or in the driveway, or at a playground, or over a much-needed glass of wine essentially asking the same question over and over: what do we do with these boys?  Is it normal that they turn everything-everthing- into a weapon?  Is it ok that they are so competitive and argumentative?  That they almost seem to be looking for a fight?  Should we be concerned that they find bodily functions hysterical?  That they instinctively turned one of our history sentences about the liberators of South America from “they fought” to “they fart”.  So many questions; such unchartered territory.
And here we are now.  With a heaping pile of new questions, with a flood of tears attached to each one of them.  Such unchartered territory.  But I have hope that the God who guided you into raising and loving Stephen up to his very last breath, will also guide you into releasing and remembering him up to your very last breath.
Stephen gave my family the gift of adventure, first fights, first sleepovers, half-eaten apples, he gave us the gift of boyhood friendship, and brotherly love, and a deeper understanding of our hope in Jesus.  Our sons chose to honor him by returning to the trampoline park that had been the location of their last adventure together.  That seemed fitting.  They also asked if there will be wrestling and sword-fights in heaven.  I sure hope so.
JD, Kit, Sally Jane, Allison, Betty- thank you for sharing Stephen with all of us.

When I think back to the weeks leading up to Stephen’s Homecoming, I’m amazed at how much he was celebrated.  He had marched in his first-ever parade on the 4th of July, and we had risked the crowds and the humidity and my looming due date to line the streets and cheer for him.  He smiled and threw candy to Sam. 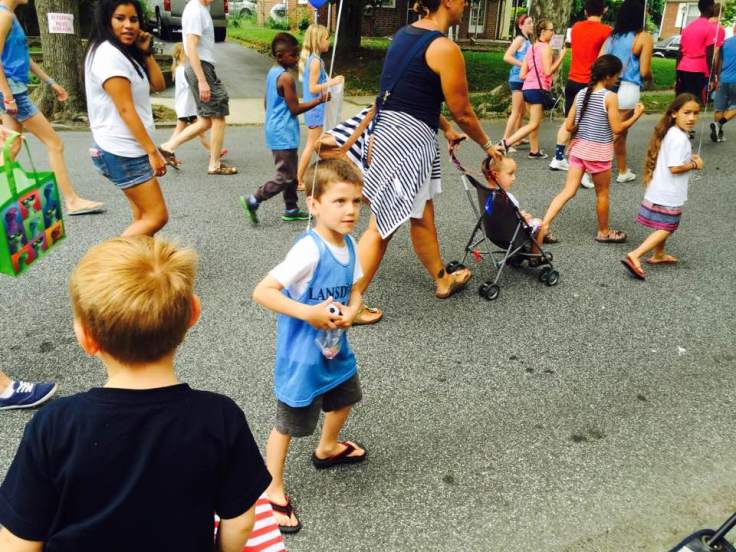 And then we sweated the night away watching fireworks and managing kid meltdowns. 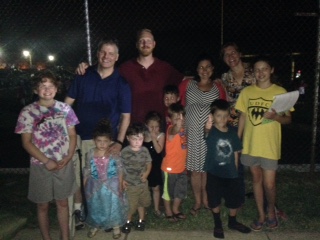 Two weeks later, we once again braved the humidity, the crowds and my looming due date to support him at his first-ever swim meet.  We had such a beautiful night sitting around the pool and cheering him on. He was so proud.  In darker moments yet to come, I would come back to this memory again and again with so much gratitude- the way we all gathered to cheer Stephen on in his race to the finish line. 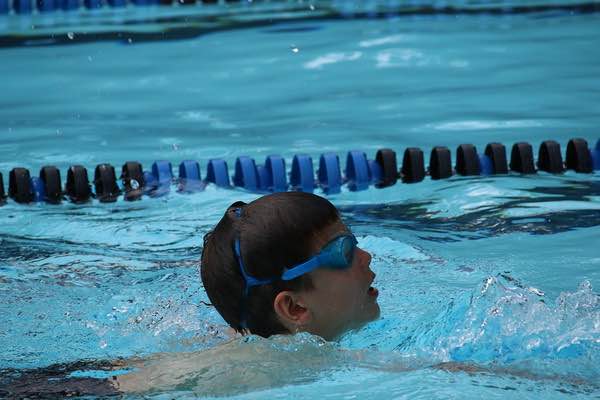 It’s hard to believe it’s been 2 years.  So much changes in kids’ development in the span of 2 years.  Sam is now 8.  He still keeps this picture on his bed stand, framed and surrounded by treasures that had been given to him by his best friend.

He still asks questions weekly- all my kids do- as if needing to reprocess his friend’s death through the ever-changing lense of his growing maturity and understanding.  The Littles have made the trek to visit us in Georgia twice now, where there has been laughing and crying and bike rides and prayers. And new memories. 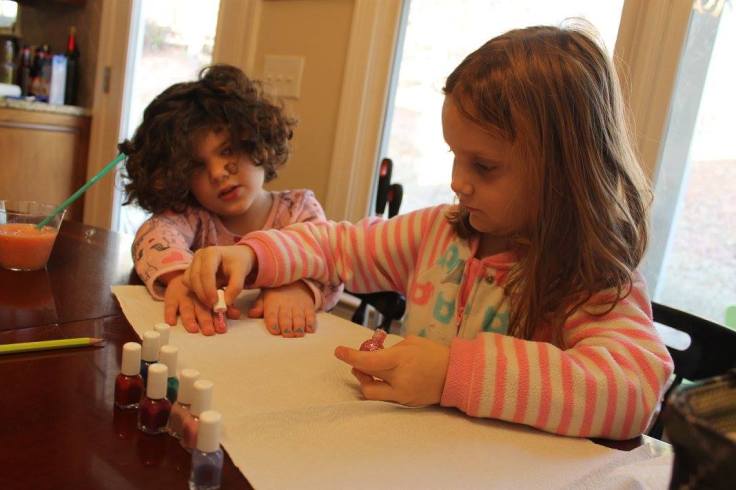 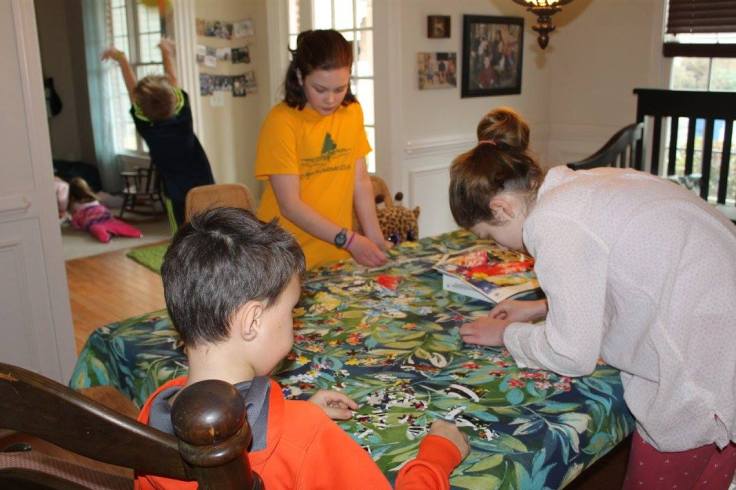 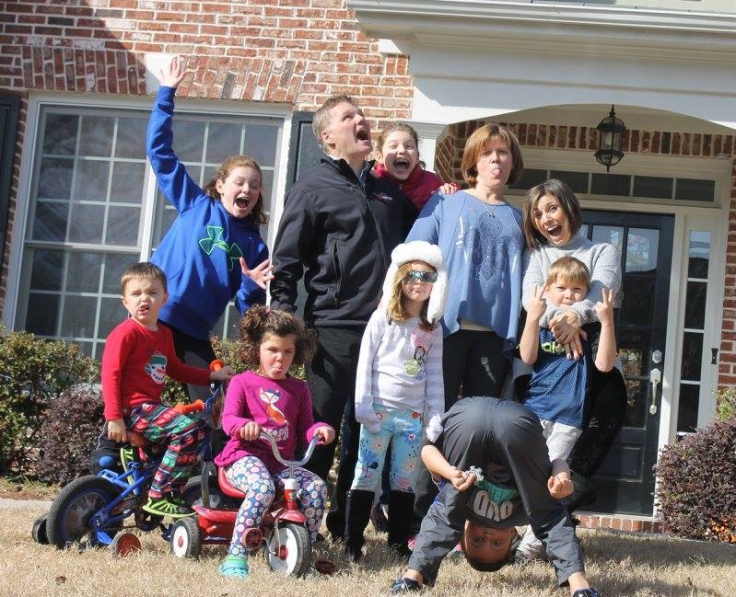 And a deeper understanding of the fragility of life; the gift of it all; the unpredictability of it all.

There’s a time for everything under the sun. May God grant us all the possible courage, wisdom and joy as we walk through them on our way Home.